10 Tips for Including Puzzles in D&D

Puzzles in D&D are a risky business; players seem to either love them or hate them. (LockHouse is an escape room, so if you’re reading our blog we’re assuming you probably like puzzles, generally speaking.) The main sticking point is that unlike the roleplaying or combat elements of D&D, which depend on the character’s abilities and rolls, puzzles rely on the player to solve them.

This can lead to a lot of metagaming agony — what do you do if you as a player know the solution, but you’re roleplaying a character who has few Intelligence or Wisdom points and even fewer brain cells? If you’re stuck, can you just roll to see whether your character knows the answer, or is that cheating? Sooner or later, half the party is undergoing an existential crisis about the nature of knowledge, the others have decided they’re sick of puzzles and are attempting to ‘solve’ it by hitting it really hard, and nobody is having fun, least of all the DM.

But it doesn’t have to be like that. Puzzles can be a fun addition to your D&D session, a way to test your players’ creativity, and get them invested and working together. Here are our tips for including puzzles in D&D (in a fun and cool way that won’t give anyone a headache)!

1. Give your puzzle a purpose

When you’re designing a puzzle for your game, think about why you’re putting it there. Often, puzzles can feel like something extra thrown in just to pad out a session — but if you want your players to get invested in your puzzle, it’ll feel more significant if it fits into the worldbuilding. Plus, puzzles can help the game along in other ways. As a DM, think about what you want your players to gain from the experience. Is it just a way to let them find more cool treasure? Will they learn something new about the story, or about each other’s characters? Problem-solving is a great way to get people working together under pressure, so even if your players go completely off the rails, having them try to solve a puzzle is a good way to encourage roleplay, as characters bond over their shared triumphs and frustrations.

Make sure to reward players for engaging with a puzzle (even if they fail to solve it, or end up brute forcing it!). If there’s no real reason for a puzzle to be there, then the enthusiasm they feel on getting past it won’t feel proportional to the effort they put in.

When you’re designing a puzzle for D&D, it’s usually more fun to go with something easy. Have you come up with a puzzle that you think is good? Great! Now dial it down a notch in complexity. And another notch. A simple puzzle that your players can solve is better than a complicated one that they get stuck on forever. Another thing to bear in mind while designing puzzles is to make sure you’re signposting the puzzle well! Half the battle is realising that there’s something to be solved in the first place. Make sure all the components to the puzzle are pretty obviously linked together, so that your players won’t waste a whole bunch of time wondering what they’re supposed to be doing.

3. The ‘right answer’ is optional 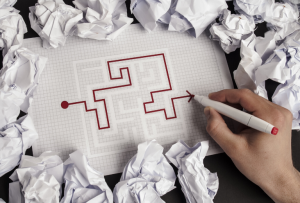 A lot of the frustration with puzzles in D&D comes from treating them like an unavoidable hold-up, where the players are stuck unable to go anywhere or do anything else until they come up with the One Correct Answer. Instead of seeing them as insurmountable obstacles, treat puzzles like any other RPG scenario. Let your players engage with it however they want to (yes, this includes brute forcing it or skipping it), and encourage creative thinking. If they’ve spent a long time thinking up a solution that seems like it ought to work, reward it even if it’s not the ‘correct’ answer you were aiming for.

One way to encourage this kind of gameplay is to come up with puzzles that rely on a certain outcome (balancing weights, reaching something unreachable, etc), but let your players have free rein in figuring out how to actually achieve that outcome. And if the players do decide they’ve had enough and start looking for a way around the puzzle — give them one! It might not be the puzzle-solving you’d envisioned, but players work to get around a puzzle can be just as interesting in terms of the story they’re telling.

It can be handy to add some kind of in-game timer or penalty system in place for if (or when) players get things wrong. Having some built-in repercussions prevents players from just taking ten (or twenty) to try every possible combination. But it can be disheartening for players to think they’ve solved it, only to be met with a bunch of damage and no new ideas.

Instead, try giving players something when they fail — the massive explosion that blasts the players when they get it wrong also reveals a hidden alcove with some more clues in it. Also, if you’re going for a puzzle that has one correct solution, make sure that it can withstand more than one attempt. Anything that’s necessary for the puzzle to be solved should be robust, because players are really, really going to want to mess around with it, and it’s a bummer if the game becomes unwinnable because the crucial piece gets destroyed, or lost, or eaten.

5. Design puzzles for the characters, not the players

One way to get players to engage with puzzles in-character is to build the puzzles around things that are relevant to the characters. Tie the puzzle to aspects of their abilities, knowledge, or backstory, and let them do a check as soon as they encounter the puzzle to tell them how much they recognise about it or what it reminds them of. This is a good way to get players started, and encourages them to approach the puzzle from the perspective of their character.

For example: rather than telling all the players that the symbols in the chamber are symbols for earth, air, fire, and water, have the symbols be from a language/culture that one of the players knows, and give the information to that player. Or have the missing item that’s needed to solve the puzzle match the description of a trinket that one of the characters has been carrying for a while — even a non-puzzle-oriented character can still be instrumental in ‘solving’ the puzzle by realising they have the necessary piece. As well as being something the players are solving, the puzzle becomes something the characters are engaging with, and it might help to bring up some backstory or roleplaying while they’re at it.

6. Include something for everyone 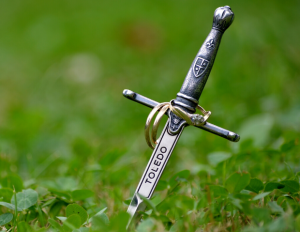 The most useful tool for solving puzzles

If your players’ characters aren’t particularly inclined to logical problem-solving, you can build in other elements to puzzles that play to your characters’ strengths. Real escape rooms have a range of different styles of task, allowing players to fill different rolls — puzzles in D&D can operate on the same logic!

If you know you’ve got someone playing a Strength-based character who’s bad at puzzle solving, then make part of the puzzle rely on moving something heavy into position, or have a part of the puzzle accessible only for as long as a character can hold open a lowering drawbridge. If you’re working with a spellcaster whose favourite cantrip is Dancing Lights, include a ‘blacklight’-style puzzle in a dark space where the clues are only visible under magical light. By making character abilities relevant to solving the puzzle, you’re giving everyone something to do, even if the players themselves don’t feel like they’re good at solving puzzles.

Encourage all the players to work on the puzzle, even if they feel like their character couldn’t solve it in-game. Unless they’ve got ‘Cannot and Will Not Solve Puzzles’ written specifically on their character sheet, don’t make players roll to see whether their character is able to solve a puzzle — if a player can come up with the answer, then allow the character to get there too. That said, for the sake of roleplay, it’s perfectly possible for characters to come up with the right answer in different ways — low Int/Wis characters might stumble across the right answer by accident or luck, or get there via a ridiculous process that by all rights shouldn’t make sense, but any character can have a moment of puzzle-solving brilliance.

Providing physical components is a fun way to help players engage with puzzles. This can be anything from a physical puzzle that they’re required to manually solve, to a picture cut up into pieces. Visual references are helpful for puzzle-solving, and they’re also a fun way to make it more immersive. If your group is really into puzzling, you could even repurpose components from an escape room board game to suit your game.

If you’re getting your players to roll for hints, try setting a very low DC or using a tiered system that means they can’t fail — otherwise, you run the risk of players getting stuck frustratedly failing to notice anything, and the game will grind to a halt while they wait for new information. Instead, give players a push in the right direction whatever they roll, but provide more or more specific information for higher rolls. Alternatively, give them the same hint no matter what they roll, but for low rolls add a negative consequence as well — in order to notice the hint they might also set off a trap in the process, add some time pressure, take damage, or otherwise make things harder for themselves. You can also build hints into the game for players to access, in the form of NPCs or hidden clues to be discovered.

10. Find out what your players want!

There are lots of different styles of puzzles out there. Before you spend a long time pouring your soul into some genius puzzles for your dungeon, it’s worth having a conversation with your players about whether they’re interested in puzzles, and what styles they’re looking for. Knowing what your players want to get out of it will help you come up with something that’s going to be fun for everyone involved!

For more D&D suggestions, check out our tips for first time GMs! Got some great ideas for puzzles in D&D, but don’t know how to get started playing? We’ve got you covered with our intro to playing tabletop RPGs online.