Escape Room Board Games to Play at Home

Escape room board games are designed to give you the experience of escape room challenges — in a box to take home! Now you can solve puzzles from the comfort of your own living room, basement, or the ornate board games salon of your haunted castle. All escape room board games have slightly different approaches to the format. Here is LockHouse’s guide to two of the main options out there, Unlock! and Exit.

Replayable: Once you’ve completed the game, replaying it probably won’t be fun until enough time has passed that you’ve forgotten the solutions, but you can hand it on to someone else to play. 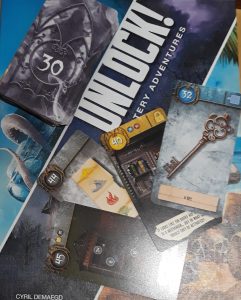 Unlock! takes the main concepts of an escape room — finding hidden items, using things in combination, entering codes — and distils them down to the simplest possible gameplay. The only components to an Unlock! game are a deck of beautifully-illustrated cards and the companion app. As well as keeping track of your time, the app allows you to type in codes you’ve worked out, and interact with ‘machines’ — if you’ve revealed a card depicting something mechanical, you can flick the right switches or press the right buttons on a digital rendition of it in the app in order to progress.

Combining items. Cards with a red puzzle piece icon can interact with cards with a blue puzzle piece icon: add together the numbers on the two cards and look up that card number to see whether you gain any result. The game does penalise you for having too much fun with this — trying to use the hammer card on the wrong object can turn up a failure card and cost you a penalty. (Using a hammer on the items in a real escape room is also discouraged.) But having various items arrayed in front of you and trying to figure out how each of them might come in handy is a huge part of the fun of escape rooms, and Unlock!’s mechanic manages to capture some of that fun in card form — provided you’re willing to take a few penalties in exchange for the joy of experimentation.

Too many cards! As you explore an Unlock! scenario, it can start to feel like every new card you reveal is asking you to draw six more. A side effect of the wide range of places, items, and puzzles is that you can end up swamped in new details, trying to pay attention to a hundred things at once. Despite the deceptively compact deck + app setup, if you’re playing an Unlock! game, we recommend having a big surface to play it on, in an attempt to keep track of all the new information you’re uncovering.

Examine all the cards carefully for hidden objects and concealed codes.

Players: 1-4 (more if you don’t mind crowding together to look at things) 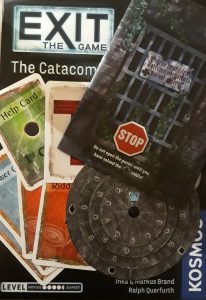 Exit games are some of our favourite things. Each game contains decks of riddle cards and hint cards, a decoder wheel for entering solutions, and a few ‘strange items’. You’ll need to use everything — and we mean everything — about the box in order to solve the puzzles and progress through the adventure. There’s a bonus app which explains the rules, tracks your time and plays an atmospheric soundtrack, but it’s not necessary — all you need to complete an Exit game is the game itself (and your own wits)!

The puzzles. Play-at-home escape room board games sometimes have a hard time capturing the ‘Aha!’ exhilaration of an escape room — Exit nails it, consistently. The puzzles are ingenious, requiring you to think in new ways, and solving them is fun to a genuine, alarming degree. If you’re stuck, Exit has a multi-tiered hints system. The first hint card lists the components you need to solve a puzzle, letting you know if there’s something you’re missing before you decide whether to flip over the second card and get a hint on how to solve it.

Lack of replayability. Exit requires you to use every component of the game, sometimes cutting things up, altering or destroying them in the process. This means that once the game has been played, it’s not playable again. There’s a sort of bittersweet fun to destroying it as you go: like a real escape room, it’s about the experience, and once you’ve done it, it’s done forever. But the pang of rendering such a good game unusable is real. Luckily, there are now twelve unique games in the series, plus a double-length special, so you’re unlikely to run out any time soon.

Remember to turn things over. This is brought to you by painful experience. The last one we solved had crucial information on the reverse sides of cards and items that we failed to flip over — three times in a row. Yes, it’s embarrassing. No, we don’t want to talk about it.

Both Unlock! and Exit games are available in our board games foyer, along with a wide selection of other board games to purchase and play.

Put your puzzle-solving practise to the test in one of our three escape rooms!