Need inspiration for Halloween activities? Find out who’s flaunting their haunting this October with LockHouse’s suggestions for Halloween events in Cambridge.

If you’re looking to be terrified this Halloween, look no further. Hinchingbrooke House in Huntingdon, a historic house on the site of an 11th century nunnery, has claims to a few ghosts at all times of year. For October, however, it becomes truly nightmarish. Horror at Hinchingbrooke House is an interactive live horror experience, and perhaps the scariest Halloween event in Cambridge (or thereabouts). Explore a maze full of live actors, sound and lighting effects ⁠— definitely not for the faint-hearted. 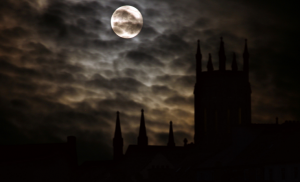 Spend some time this spooky season getting better acquainted with the ghosts of Cambridge! A ghost tour is the perfect way to visit some of Cambridge’s best haunts (literally). The many cobbled streets and ancient edifices are the perfect backdrop for an evening walk filled with some spine-tingling tales of the macabre side to local history.

If your Halloween wouldn’t be complete without blasting the Time Warp, you can catch this Halloween cult classic at the Arts Picturehouse cinema on October 31st. The film has a tradition of lively theatre showings ⁠— back in the 70s, it was standard for audiences of exuberant fans to dress up as the characters, conduct ‘shadow performances’ along with the actors on the screen, or engage in ‘call-and-response’ exchanges of quips with the dialogue.

We didn’t think that Cambridge cyclists could get any scarier, but we might have been wrong. For those looking for a more active Halloween excursion, Cambridge Bike Party are organising a spooky ride on the 31st, kicking off at 8:30 PM. Get out and about by getting dressed up and going for a ride. It’s not all hard work ⁠— the route goes from party stop to party stop, with pauses for celebrating along the way.

Ghost stories in the Leper Chapel

The ghastly spirit of the season isn’t confined to October ⁠— venture out on November 8th-9th to spend a spine-tingling evening listening to some eerie tales in a 12th-century chapel. The Leper Chapel of St Mary Magdalene is hosting a production of two thrilling tales by M. R. James, performed by Robert Lloyd Parry. As well as having been both provost of King’s College and Vice-Chancellor of the University of Cambridge, M. R. James was the author of some of England’s most enduringly haunting ghost stories, so this is sure to be a wonderfully atmospheric evening. 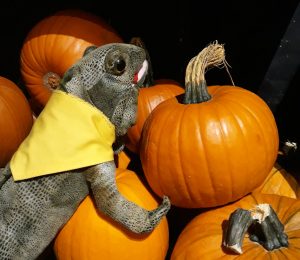 If you’re among the sorts of people who wish that escape rooms were more like horror movies, LockHouse has got your Halloween covered. We’ve transformed two of our rooms into dens of terror — book any time during October 2019 to explore a terrifying derelict space station in We Are Not Alone, or a gruesome serial killer’s lair in Cabin in the Woods. Read all about our Halloween rooms here! (We’re also currently selling pumpkins in the store for Halloween. What more could you want?)

Don’t feel like going out? Have a spooktacular movie night with our favourite Halloween films!