Trap-riddled Egyptian tombs are one of the most common escape room themes. It’s no surprise that so many adventure movie tropes lend themselves to escape room adaptation: if you’re a fan of escape rooms, you’re also probably a fan of secret doors, puzzles and traps, and high-pressure situations inside collapse-prone architecture. Here are a selection of LockHouse’s favourite adventure movies, capturing escape room-style shenanigans in film form!

Indiana Jones and the Last Crusade (1989)

No self-respecting list of adventure films could be without the quintessential adventurer. Indiana Jones has been defining the adventure genre and giving people the wrong impression of what archaeology involves since 1981. The Last Crusade, the third instalment in the franchise, adds a dose of depth via father-son bonding to the requisite booby traps and collapsing temples.

(North Dakota Jones, the explorer lost in our own Egyptian Tomb here at LockHouse, is definitely no relation. What a weird coincidence.)

The Mummy is everything you could ever need from a film about exploring an Egyptian tomb. Brendan Fraser makes an excellent swashbuckling adventure hero, but the real joy of this movie is Rachel Weisz as Evelyn, an amateur Egyptologist and proudly self-proclaimed librarian. Throw in a gruesome mummy and some flesh-eating bugs for good measure, and voila. Cinematic perfection.

This adaptation of Neil Gaiman’s novel by the same name captures all the magic, whimsy, and menace of its fairy tale setting, with the added joy of a flying pirate skyship captained by Robert De Niro. The eclectic characters encountered by trying-his-best hero Tristan Thorn (Charlie Cox) range from charming to nightmarish, with Claire Danes shining (literally) as Yvaine, a fallen star.

We’re not going to lie to you: this movie is bad. The amount of booby traps, hidden doors, and nefarious plots which the plucky young protagonists are exposed to is outrageous. If you manage to stick it out through the entire movie, there’s a final reward in the form of a post-credits plot twist which manages to be more exciting than anything that happened along the way. And yet. Somehow. If you’re a fan of trope-riddled, Victorian fantasy ridiculousness, and you’re willing to deactivate the part of your brain that tells you movies should be good, then Curse of the Midas Box is a deeply enjoyable experience.

This animated adventure is a classic, featuring the endlessly-loveable duo of con artists Tulio and Miguel as they stumble their way into the city of El Dorado, accompanied by several songs by Elton John and Tim Rice. It’s one of those films that’s at least as entertaining to watch as an adult as it was when you watched it as a kid (maybe more so). 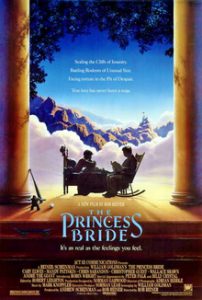 Few films are as much fun to watch as The Princess Bride. A fantasy adventure movie framed by the metanarrative of a grandfather reading a story to his reluctant grandson, it’s the perfect blend of witty, ridiculous, and extensively quoteable. Beneath the humour, there’s a sincerity that occasionally brushes against genuinely poignant — the culmination of Inigo’s revenge arc, for example, swoops seamlessly from a long-running gag to a hard-hitting, sincere character moment that’s incredibly satisfying to watch. Full of terrifying eels, swordfights, quicksand and castle-storming, The Princess Bride will buckle your swashes with the best of them.

Want to get in on the tomb-raiding action? Come and experience everything you love about adventure movies here at LockHouse with our Egyptian Tomb escape room! (We promise there are no flesh-eating scarabs inside.)

If you’d like to find out more about any of these films before watching, we recommend doesthedogdie.com, where you can check content warnings before you watch (not spoiler-free). For more movie fun, check out our Halloween and spy movie recommendations!