Feeling stressed out? You’re not alone. If it’s all getting a bit much for you, LockHouse recommends unwinding with a feel-good film. Grab a blanket and the warm beverage of your choice, and distract yourself with some comfort films! Can’t decide what to watch? Here’s a selection of recommendations from the LockHouse team. Answer these questions to help you decide which of these uplifting favourites to put on.

Pixar’s Inside Out is a beautiful animated comedy about the emotions involved in growing up.

3. What’s your preferred bear-endorsed sweet food from a jar?

The beloved characters from Winnie-the-Pooh and the now grown up Christopher Robin find each other again.

5. Which scares you most? 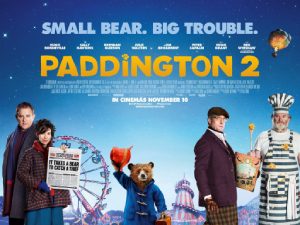 Paddington tells a heartwarming story based around the beloved children’s book character.

This sequel to Paddington sees the eponymous bear framed for a crime he didn’t commit.

9. Based on a literary classic?

This iconic film transposes Shakespeare’s Taming of the Shrew to a 1990s American high school setting.

Bridget Jones’s Diary, adapted from a novel based on Austen’s Pride and Prejudice, is a light-hearted cult classic.

Imagine Me & You adds some refreshing lesbian diversity to beloved rom-com tropes.

14. What warms your heart most?

Set during the 1984 miners’ strike, Pride is an uplifting film based on the true story of activist group Lesbians and Gays Support the Miners.

In Kinky Boots, a struggling shoe factory pulls through by embracing diversity and switching to manufacturing boots for drag performers.

This biographical drama depicts how a journalist’s life changes thanks to interviewing Mr Rogers.

Sometimes you’ve just gotta watch some people be devoured by a spinosaurus. Whatever makes you happy. We’re not going to judge.

If your ideal comfort films are heart-stopping rather than heartwarming, check out our favourite adventure movies for some excitement to help you pass the time! Or to distract yourself with something scary that isn’t the news, check out our recommended Halloween films. Check content warnings before you watch at doesthedogdie.com (not spoiler-free).