Character creation is one of the best-loved aspects of tabletop RPGs. Whether you’re playing D&D or branching out into a different game, coming up with your character is an important step that can mean the difference between an okay game and an unforgettable one. Your character is the ‘roleplay’ part of tabletop roleplaying; the persona you get to imagine yourself as while you’re adventuring. They’re your cool, beloved alter ego, that you can project onto to your heart’s content. They might also be a dragon. What more could you want?

But even if you love character creation, it can be tricky to do well. Creating a TTRPG character is different to creating something like a book character — not only do you need to come up with a character, but they’ve got to be playable and work within the context of the game. So… how do you go about making a character that’s great to play? By reading our list of character creation tips, obviously!

You don’t have to write a novel-length backstory in order for your character to be believable (although if you want to, by all means, don’t let us stop you). But unless you’re playing Waiting for Godot: The RPG, your character is probably going to have to make decisions and do things. On a very basic level, it’ll help keep the game moving if your character has something that motivates them, a reason they want to be doing things. Ask yourself what your character wants. This can be an abstract concept, like knowledge or acceptance, or a specific goal, like I want to discover who killed my father and get revenge. Or, ideally, both! Specific goals provide details of what your character is interested in, and give your games master some hooks to work with. Abstract, big-picture motivations are helpful for explaining your character’s behaviour in situations where your father’s murder really just isn’t relevant, and they keep your character ticking even if your specific goal changes or is completed.

2. Give them a secret

Deep, dark, dreadful secrets, or just-doesn’t-really-tend-to-come-up secrets. Provided that the other players can’t read minds, there’s bound to be some stuff that the others don’t know about you. Ask yourself what your character doesn’t want to tell people. Having secrets encourages roleplay by letting the characters gradually find out more about each other, and it’s an easy way to kick off dramatic revelations. You probably shouldn’t keep secrets about your character from the games master, though, or the GM won’t be able to torment you with them. 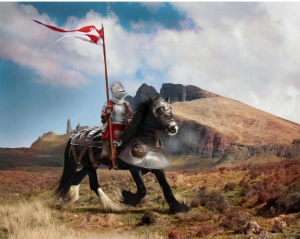 All right, so you don’t absolutely have to use a character voice. It technically won’t break the game if you don’t. But figuring out a voice for your character is helpful for multiple reasons. For one thing, it means you can easily distinguish between in-character and out-of-character comments while you’re playing. Plus, it helps your character’s personality shine through. Bad at doing voices? You don’t have to stick to a completely different accent to change up your character voice! Does your character speak quickly or slowly? Is their speech natural or stilted? Do they have any vocabulary quirks or catchphrases? If you’re still stuck for voice inspiration, pick a movie character or celebrity and do an imitation of them as your character voice. It’s easy to remember, and people probably won’t pick up on the impression, just your amazing commitment to giving your character a voice.

Tabletop RPGs are predominantly an audio medium, in the sense that they rely mostly on verbal description. There’s also usually a lot going on. Put together, this means that if you introduce your character with several paragraphs of subtle description, most of it will probably go in one ear and out the other, or be forgotten between sessions. Instead, giving your character a couple of memorable, identifiable details will help other players imagine them. What’s the first thing people notice about your character? It could be anything, from their glowing purple aura to their dreadfully unfashionable overalls to the dagger they managed to slip into your back while you weren’t paying attention.

5. Don’t be afraid of tropes

Don’t be afraid to use character tropes that seem like they’re familiar or basic. Steal inspiration from your favourite book or movie characters, or shop around on TVTropes for inspiration. Tropes are like building blocks for characters and narratives. They’re helpful for roleplay, because if you’re familiar with how particular tropes tend to play out, then you’ll have an easier time slipping into character. You can also turn tropes upside down, subverting expectations and giving your character a fun twist. Don’t worry about being tacky, over-the-top or one-dimensional. You’ll be able to fill in more subtle traits as you play, but it helps kick things off if you’ve got an easy-to-use framework to fit more details into.

Unless you’re committed to playing someone resolute, stoic, and totally unyielding (which is a character in itself!), then your character is probably going to develop more as you play. You don’t have to have everything set in stone during the character creation phase. In fact, having absolutely everything about your character nailed down before you start playing can actually be a limiting factor. As you play, you’re going to encounter a range of new and unexpected situations for your character. Instead of worrying about sticking to a set of rules you established for how your character should behave, it’s perfectly okay to let them develop naturally. Something you decided at the start of play might not feel like it’s the right decision for your character in the moment — and that’s okay! Leave a bit of wiggle room for your character to change and grow. 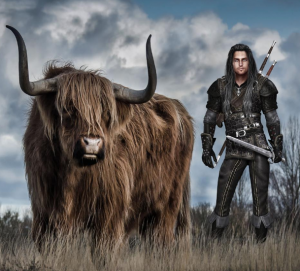 Is your character a warrior or a majestic highland cow? You decide!

The mechanical parts of the game can help feed into your character. Most tabletop RPGs have stats of some kind that you can assign to your character — while you’re deciding on your stats, don’t just think about what will give you the best chances mechanically. Take some time to think about how your stats play into your characterisation, and vice versa. If your numbers say you’re good at something, think about why your character might be good at it. Where did they develop those skills? Why are they bad at what they’re bad at? And your successful or failed rolls as you play can also tie into characterisation, often in an entertaining and unexpected way. If you set out intending to be a smooth talker, only to flub all your Charisma rolls, you can play into it and let the dice lead you in another direction — maybe your character isn’t actually as cool as they think they are.

8. Work with your games master

When you’re creating your character, think about the world they’re a part of. Give them connections to that world, in the form of places, people, or items that are significant to them. If you’re playing with a games master, then make sure you’re giving the GM something to work with! If everyone in your backstory is tragically dead, then there’s not a whole lot of opportunity for your GM to introduce them or to generate story threads that impact your character personally. Make sure that there’s room in your backstory for hooks and connections means that it might actually turn out to be important to your game, rather than just being several pages of dead weight that you occasionally draw on for flavour.

9. Work with other players

Tabletop RPGs are essentially collaborative. One way to create characters that are guaranteed to enhance roleplay is to give your character connections to the other players’ characters. Some games, such as Powered by the Apocalypse games or Fiasco, encourage you to come up with your relationships during the character creation stage. But even in games that don’t require you to have relationships with the other characters, linking your backstories can be a fun way to help develop everyone’s characters further. It also helps to get your characters talking to each other right away, bypassing the awkward chitchat that inevitably happens when you’ve just met a party of complete strangers in a tavern.

Think about what will be fun to play — and what will be fun to play with. Characters can help or hinder the progress of the game just as much as rolls can. Give your character traits that you think will help make the game fun for everyone. That’s not to say your character needs to be fun and helpful all the time — but even if you’re creating a brooding misanthrope, they should be a brooding misanthrope whose character you’re excited to explore, and someone that other players can still have fun talking to.

And, finally, if all else fails, there are always character generators. Who the F*** is my D&D Character is a lighthearted starting point for character creation (warning: profanity).

Rather be a games master than a player? Check out our tips for first time GMs, or read up on how to include puzzles in your D&D games. And if you’re bored of TTRPGs already, there are always other hobbies to explore. Like playing an escape room, for instance. Just a thought.

LockHouse Escape Games is reopening! Find out more and book your game on our website. Plus keep an eye on our Facebook for everything from updates to brainteasers!