Is your daily routine of murdering goblins starting to lose its thrill? Does the sight of your d20 fill you with ennui? Do you wish that you could play RPGs but don’t want to touch the D&D rulebook with a forty-foot pole? We’ve all been there. Even for ardent fans of Fifth Edition, it can be fun to change things up. There are lots of great tabletop RPGs that aren’t D&D out there. Here are LockHouse’s recommendations for other games to check out (in descending order of the number of dice you’ll need). 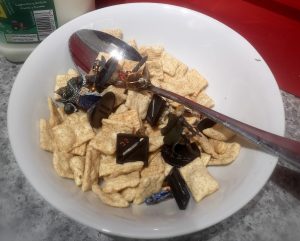 Not what people mean by “crunchy” RPGs.

If you’re feeling pedantic, you’ll point out that Pathfinder pretty much counts as D&D. You’ll also probably be the kind of person to enjoy Pathfinder. It developed out of D&D 3.5e, intended to improve the balance of various 3.5e rules while keeping the same basic rules and mechanics. A lot of Pathfinder will feel very similar to players of D&D 5e, but there are various mechanical differences. While it avoids the all-out war-game-style combat crunchiness of D&D 4e, Pathfinder is significantly heavier on mechanics than D&D 5e. 5e’s streamlined rules provide an easy pick-up-and-play intro into the core ideas of D&D, but if it’s not giving you enough mechanical depth, or you’re the sort of player who likes having a rich toolset of rule options to choose from, then Pathfinder is a good direction to head in. Plus, you can find all the rules in the public domain.

Savage Worlds is a fast-paced rules system. Unlike D&D, it doesn’t require a lot of preparation time — it’s quick to jump in and get right to the action. It’s also easily tailored to pretty much any worldbuilding or scenario you can imagine, with playbooks ranging from fantasy to sci-fi to gun-toting historical grit. We recommend Deadlands, an alternate history set in the Weird West. For stats, your character’s Skills and Attributes are each given a die type, from a d4 to a d12 — which dice you’re rolling determines how good you are at what you’re doing. There are a bunch of rules for how to set up everything from gear to combat encounters, and both the system-neutral setting and the relative simplicity of the rulebook make Savage Worlds great to start out with.

Find information on Savage Worlds, and its character sheet, online.

Fate is a generic system, meaning it doesn’t come with a specific setting. Got an idea for a game you want to play, but can’t find a system that fits the setting? You can make it work easily with Fate. Instead of a standard set of polyhedral dice, it uses Fate dice, six-sided dice marked with + or – symbols instead of numbers. (You can pick these up from most places you’d find dice, but if you don’t have any, it’s also possible to play using ordinary six-sided dice). Fate also gives narrative control to the players via Fate tokens, a resource you can spend in order to pull off cool stunts or add detail to the narrative. You can gain Fate points when things don’t go your character’s way, so when it’s played right, the mechanic leads to a great flow between narrative highs and lows for your character.

Get started with the Fate SRD online, and download rules, character sheets and more here.

Powered by the Apocalypse games 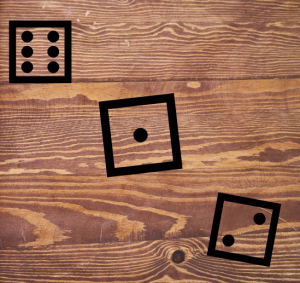 ‘Powered by the Apocalypse’ is a label given to games inspired by Apocalypse World, a game by Meguey and Vincent Baker. There’s no hard and fast mechanical definition for what makes a game Powered by the Apocalypse, but many games that go by the label tend to share certain mechanics. In terms of rolling, characters roll 2d6 and then add their relevant stat. The GM then determines what happens as a result based on the roll — a 10-12 is a complete success, 7-9 is a mixed success, with potential complications or negative effects, and a 6 or lower is a failure. Each character also has a set of moves in their playbook, that give you a particular range of options. (Not every game that calls itself PbtA will necessarily use these mechanics, but many of them do.) PbtA games lend themselves well to games that encourage storytelling and give the players a lot of room to do cool stuff. There’s also a huge range of settings and playbooks to check out!

There’s a whole world of tabletop RPGs out there, ranging from in-depth, complex rulebooks to simple one-page story games — and a bunch of them are pay-what-you-want or even free, so if you’re looking for something new to discover, there’s lots to dive into! Some examples:

itch.io is a great place to find all kinds of games to check out and help support indie game creators!

Want to play RPGs, but don’t know where to start? Come to LockHouse’s RPG nights, hosted every Monday evening at 6pm at the Grain and Hop Store on Regent Street, just across the road from our escape games. It’s a friendly space, open to beginners, whether you’re interested in some traditional dungeoneering or looking to play other tabletop RPGs that aren’t D&D. Find out more on our website, or check the Facebook group RPG Nights in Cambridge for up-to-date information!