Escape rooms may be a modern phenomenon, but ciphers and codes can be found throughout history! From ancient Greek times to the modern day, people have used ciphers to encrypt or conceal messages. Classical ciphers are often easily broken with modern technology, but they can still provide a quick and fascinating way to encrypt text just for fun. Here are 5 historical examples of classical ciphers, for all your secret message needs! 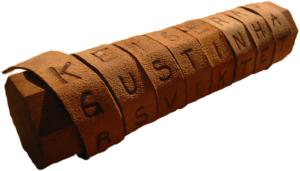 First mentioned as a cryptographic device in writings from the 3rd century BCE, this ancient Greek cylindrical tool can be used to create a simple transposition cipher. It consists of a rod or cylinder with a thin strip of parchment wound around it — the message is written on the spiral of parchment from side to side, so that when it’s unwound from the rod, the letters are out of sequence. To decrypt the message, all you need is a rod that’s the same size as the one used to write the original message: just wind the strip around again and you’re good to go! It’s not a particularly secure cipher — in fact, it’s so easy to break that it’s disputed as to whether it was used as a method of encipherment or merely as a way of authenticating messages. Either way, it’s delightful. What’s more fun than winding your message around a stick? Nothing.

This simple substitution cipher was used by Julius Caesar in his correspondence (hence the name, surprisingly). To encrypt a message, all the letters are shifted by a fixed value — if you’re shifting left by 3, for example, then D would be replaced by A, and so on. To decipher, just shift the letters back again. Since Caesar ciphers are so simple, they’re easily broken — luckily for Caesar, the technique of frequency analysis for breaking them wasn’t invented until the 9th century (by Arab polymath Al-Kindi), so the Emperor’s secrets were safe. 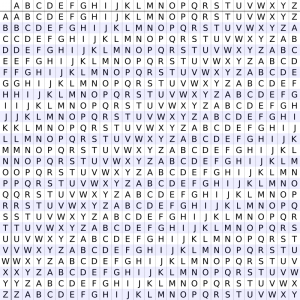 much more complex (and stronger) variant on Caesar cipher, the Vigenère cipher switches between different rearranged alphabets in order to encrypt each letter of the plaintext differently. Misattributed to Blaise de Vigenère, the cipher was actually first described in 1553 by Giovan Battista Bellaso. It uses a grid of alphabets called a Vigenère square, each row containing the alphabet shifted by one letter. To use it, you pick a keyword or key phrase: each letter of the plaintext is encrypted using the alphabet row which starts with the corresponding letter of the keyphrase. Shifting alphabets each letter makes the cipher extremely secure, since it means that frequency analysis won’t work — the super-strong cipher wasn’t broken until 1863.

Polybius was a Greek historian of the 2nd century BCE. When he wasn’t busy riding horses, travelling the Mediterranean, or writing 40-volume histories, he also created the Polybius square, a tool useful for telegraphy and cryptography. A Polybius square is a 5×5 square in which the letters of the alphabet are arranged. Each letter can then be referred to as a pair of numbers, obtained from the grid reference of the row and column numbers for that letter’s position in the square.

The Great Cipher was devised in France in the 1600s, and remained unbroken until 1893 (if it had been broken earlier they probably would have had to call it the Just Okay Cipher). It consisted of a set of hundreds of numbers; rather than standing for letters, the numbers stood for syllables. To make it still more difficult, key names could be spelled with homonyms, built out of syllables that sounded the same but were spelled differently — while some numbers were deliberately meaningless, or were ‘traps’ telling the recipient to ignore the previous codegroup.

For a dose of some less classical ciphers, find out more about the history of cryptography in our blog article about Alan Turing. Fancy your skills as a cryptographer? Test your codebreaking skills in one of LockHouse’s three escape rooms — and see if you can spot any of these classical ciphers in our puzzles. And if you don’t know which escape game to play, you can find out here!

LockHouse Escape Games is reopening! Find out more and book your game on our website. Plus keep an eye on our Facebook for everything from updates to brainteasers!