Let’s Get Digital – The World of Virtual Reality

Virtual reality – or VR for short – is an experience taking place in a simulated or artificial environment. This concept has been around since the Renaissance period and as technology has developed, so too has the exact definition of VR. But the basic premise has remained the same. How cool would it be if you could feel like you were somewhere else? To be transported to another world and experience things as if you were there?

This idea can be seen across pop culture from early science fiction writing, to movies such as The Matrix, Ready Player One and Total Recall to name but a few. Only a few years ago these ideas still seemed impossible, but that’s all changing now.

With today’s technology, virtual reality is becoming a common part of the gaming landscape. With one headset and some simple set up, you can transport yourself into any world of your choosing. You’re in the Land of Oz skipping along with Dorothy and Toto, or battling it out with some Space Pirates. Obviously, there are limitations to what you can do and where you can go, but these limitations are getting fewer and fewer by the year.

What can virtual reality do? 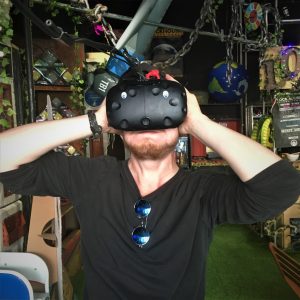 Movement is a perfect example of the limitations of VR and how they can be overcome. If you put the headset on it can be very easy to forget that you’re not actually in an enchanted forest, and if you do go for a walk there is a very real chance that you could end up face planting into a wall. However, there are ways you can get around this. Some of these ways include having a joystick that moves you around, or (in the case of most VR games) you can teleport around the environments. But this is still in very early stages.

Interaction with the world is another limitation that is being reduced. Already there are VR programs that allow you to pick up almost anything and throw it through a wall if you so desire. But seeing as nothing in the environments really exists and the only way you can interact with things is by using a controller it can be a bit disconcerting at first. But once you do manage to get past the initial strangeness of it, VR shows an awful lot of promise in many different areas.

What and how can I play?

Whilst virtual reality has many uses, it has been most readily adopted by the gaming community. It has already proven itself to be a fantastic gaming platform with new games launching steadily. Games such as Beat Saber and Superhot are gaining in popularity, both of which you can play in the LockHouse gaming foyer. Beat Saber is essentially the new dance mat or Just Dance, where players must hit flying targets in time with the music. Superhot is a first person shooter game where time moves when you move.

The huge appeal of a VR experience over a controller based or even motion sensor based game play is that you are in the game. Instead an avatar mimicking your movements, you are entirely in control and actually in the game itself. VR games are a great alternative to more sedentary based game play as rather than sitting with a control, you are moving within the gaming world directly.

You can play our virtual reality games at LockHouse Escape Games for £5 for 15 minutes in our gaming foyer.