Dungeons & Dragons is one of the most popular and well-known tabletop roleplaying games — but it can seem daunting & difficult to get into, with dense & demanding documents & dice. (Okay, we’ll stop doing that now.) Here’s a quick intro to what D&D involves, for anyone curious or looking to get into tabletop RPGs! Warning: here there be dragons. And dungeons, also, or so they tell us. Let’s get this party started!

What is Dungeons & Dragons? 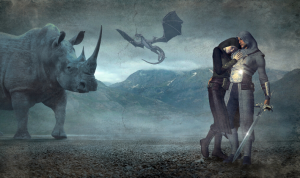 This could be you

Dungeons & Dragons is one of many tabletop roleplaying games on the market. In this game, players take the role of fantasy heroes of their own creation whilst one player (the Dungeon Master, or DM) takes the role of creating a story with challenges for the players and narrating what happens. Put another way, it’s a system for storytelling and invention. Whether you’re having conversations with other players and NPCs (non-player characters, played by the DM), making decisions about how to tackle the puzzles and traps confronting you, or just absolutely devastating some goblins with your battle axe, D&D gives you the tools to create and play a fantastical story.

What do I need to play?

How do I create a character? 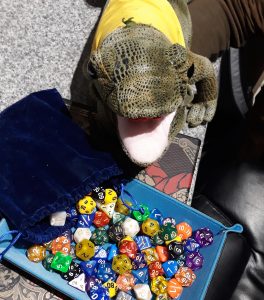 There are two basic components to character creation in D&D, choosing your race and your class. Races can range from familiar fantasy staples (humans, elves, dwarves) to the weird and wacky (half-orcs, tieflings, or dragonborn). Your character’s class is sort of like their job, if jobs commonly involved dedicating yourself to becoming an unstoppable warrior, casting magical fireballs, or sneaking up behind people and stabbing them in the back. All the races and classes have their own abilities and features, giving you a bunch of cool options for things you can do.

As well as the mechanical aspects of your character, once you’ve filled out your character sheet, it’s worth thinking about the narrative and roleplaying aspects. Think about what kind of character you’d like to play, and how they’d react to situations. Ultimately, what makes your character yours won’t be their stats, but the personality you give them.

You open the door to the dungeon. In the twilight gloom you can barely make out the silhouette of the murderer you’ve been chasing for the last two days. There is a small glint of metal as they draw out a large stained knife.

Would your character attack immediately or try and talk first? In a fight would they aim to disarm or kill? What do they want? What’s their backstory like?

One way to think about your character’s motivations is by deciding on their alignment. Is your character good or evil? Are they lawful — valuing and respecting authority and established process — or chaotic, valuing independence and their own decision-making over following rules? The D&D alignment system is also a good personality test to apply to all your friends, family, and hated politicians.

Tips from LockHouse: It’s also important to remember when creating your character that D&D is a team based game, based around completing challenges and overcoming obstacles together! A lot of the fun in RPGs comes from how your character interacts with other characters. That’s not to say that you can’t play an evil or misanthropic character, but we recommend bearing in mind the comfort of the other players — avoid your character as an excuse to commit horrific acts. Likewise, if your character is a tragic loner who never speaks or cooperates with others, then it limits the rest of your party’s ability to interact with you.

How does gameplay work?

The basic flow of D&D involves your characters reacting to a situation created by the DM. There might be traps or puzzles to evade, mysteries to investigate, NPCs to befriend or insult, and fights to win. After the DM describes a situation, it’s down to you as your character to interact with the world you’ve been placed in. Once you describe, narrate, or act out what your character is doing, the DM will get you to roll an appropriate check to see how successful you are — depending on your rolls, you might succeed, or it might blow up in your face (sometimes literally). As you progress through the story you’re creating, usually over multiple sessions, you’ll level up your character, getting more abilities and becoming more powerful.

Where can I play?

Don’t know where to find people to play with? LockHouse Escape Games hosts a regular RPG night every Monday from 6pm. It takes place at the Grain and Hop Store on Regent Street near Parker’s Piece. Entry is £3, and it’s open to anyone, including absolute beginners — come along, find a game to join, and start adventuring! You can find out more and keep up to date by joining the Facebook group RPG Nights in Cambridge!

For a break from RPGs, check out our board game recommendations! We’ve got suggestions for everything from longer family games to ones you can play in just 15 minutes. Or get out of the house and try some real-life adventuring in one of our escape rooms! (We recommend leaving your greatsword at home, though.)