Situations in escape rooms can get a little tense.  We’ve seen it time and time again: the clock is ticking, the pressure is on, and people make silly mistakes when they’re frazzled.  It’s human nature, but it doesn’t make it any less frustrating when you find yourself yelling at your best friend about a padlock. So we’ve decided to put together a list of common mistakes people make in escape rooms and our tips to avoid them. 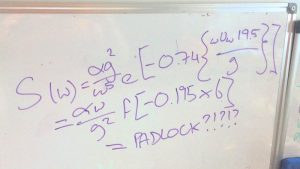 Whilst it can be tempting to jump straight for the elaborate solve, most of the time an escape room puzzle will be solved with a relatively simple and intuitive leap of logic.  Most rooms don’t assume a certain level of knowledge in any particular field, so it’s doubtful you’ll need to bust out that complicated trigonometry equation buried in the back of your brain. Go for the obvious answer first and then if that doesn’t work, start getting a little more elaborate.

This isn’t some elaborate trick; we aren’t doing a big double bluff.  If something is labelled as ‘Not in Game’ it means it is not part of a puzzle and you should leave it alone.  Escape rooms are part of a building in their own right, and so will often contain things like gas meters, fuse boxes and air con units. 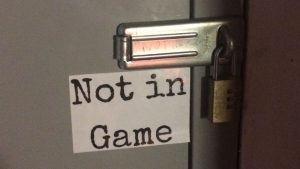 As escape room designers, we are hampered by the existing structure of the building. We aren’t intentionally trying to trick you. The same goes for major structural parts of the room.  Whilst we can’t speak for every escape room out there, we can tell you that Lockhouse does not have the budget to rebuild the room after every game. Given this, it’s highly unlikely there are any clues in the ceiling or under the carpet.  Please don’t pull them apart.

Tip 3 – Spread out and work on different puzzles

At Lockhouse our maximum capacity for a room is between six and seven people.  This is quite a few bodies all crammed into the same space. The age-old saying ‘divide and conquer’ can definitely help in a situation like this.  Rather than all crowding around the same puzzle and attempting to solve it as one hive mind, we recommend spreading out and seeing what else can be solved in the room.  You’ll be more efficient and will save time in the long run, plus everyone will get the satisfaction of feeling like they’re doing something.

Tip 4 – Stick with one idea before jumping to the next

There’s nothing more frustrating than watching a group of people all attempting the same puzzle and getting in each other’s way.  For most puzzles in escape rooms, there will be multiple ways you can take it on first sight, and part of solving the puzzle will be running through the options and seeing which gets you results.  But for this to work, each option needs to be tried fully to see if it works before moving on. Whilst it’s tempting to cut across team mates if you think they’re wasting time and you’re sure you have the right answer, it’s usually quicker to let them finish what they were doing.  Even if they are wrong, you won’t have wasted anywhere near as much time as if you continually cut across each other and no one gets to try their idea fully. 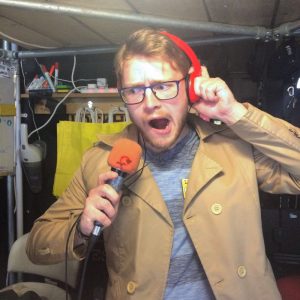 At Lockhouse Escape Games not only do we allow hints, we encourage you ask for them if you really are stuck.  The attitude towards giving hints varies wildly across escape rooms. Some places will penalise you for hints with time penalties, some will limit the number of hints you are allowed, some will refuse to give any at all.  We aren’t like that in Lockhouse. We believe hints are a core part of the escape room experience, as they can keep you moving forward, letting you know if you’re on the right track or if you’re wasting time. And let’s face it, no one wants to be stuck on the same puzzle for half an hour – that’s just not fun. Or at least, we don’t think it is!

These are just some of our tips and tricks to help you get the most out of your next escape room experience.