If you’re not playing tabletop RPGs by this point, you’ve been doing lockdown wrong. And while rolling dice is obviously deeply thrilling, the real magic of TTRPGs comes from the story you’re creating with your group. Read on for some tips on storytelling in tabletop RPGs, from the creator of Eternity TTRPG!

If you haven’t ever played tabletop roleplay games, they’re well worth the time. It’s also usually not too hard to find a group nowadays, especially online. When it comes down to it, the best part about playing a TTRPG in a small group, as opposed to a video game, is the unique storytelling that takes place. 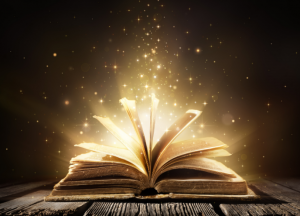 When you play a video game RPG, typically there’s a set storyline that takes place, through which your character adventures and explores. At best, there are moments in the story where you can choose from multiple options that ultimately influence how the story progresses and ends. But you purchase the game for the set storyline you want to play through—there’s no changing what’s already “programmed” to happen. And playing as the character, you have a finite set of options available from which to select.

When you play a tabletop RPG, however (TTRPG, for short), there are literally unlimited options. In most game systems (like Dungeons and Dragons), players divide themselves into roles: one person plays as the ‘game master’, while others play characters. It’s the game master’s role to create the game world, people that inhabit the world, events taking place, places to explore, cunning plots, and storylines. Other players then navigate their characters through the world that the game master created. There may be a centralised plot taking place, of the game master’s creation, but the amount of options available to players are limitless. So much so, in fact, that oftentimes, a central plot designed by the game master gets utterly altered by players’ choices.

The combination of game master world-building and player choices actually forms a unique story that no single person could, by themselves, have ever created. It’s why group storytelling is so unique, and why, even in a world of video games, people love to play tabletop RPGs.

What Makes a Good Story in a TTRPG?

In case you decide to try out a tabletop RPG with friends (in person or online), here’s some great tips for creating a great story. After all, with tabletop games, you get to create the story yourself! So, it can help to know a few basics to use as a starting point.

All great stories begin with some kind of interesting hook—some element in the world that demands attention. It can be a location that needs exploring, a villain gaining power, a national holiday, an ancient relic suddenly uncovered, or even the request of a friend for help. Think back to any books or movies that have impacted you from the past. The beginning of any story really just takes a single compelling idea that promises something fantastic, and people will be hooked. 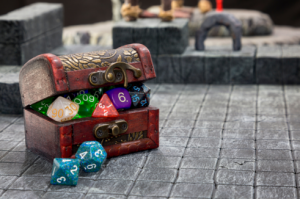 Once the journey has begun, the characters in the story should go through a series of moments that increase the tension. Since players are already invested in the storyline from the great idea put forward in the hook, use that hook to dig in a little deeper. Make whatever goal the players had at the journey’s start just a little harder to reach than they’d originally thought. It turns out that the world has forces at work in direct or indirect opposition to the players’ characters. Maybe the area they want to explore is surrounded by monsters. The villain gaining power can only be stopped by uncovering a weakness that’s currently unknown. Or the ancient relic the group’s after is sought by many groups—one of whom who manages to beat the party to the item and acquire it first.

Another way to raise stakes, increase drama, and make players really ‘feel’ what’s happening is by having them uncover new information. Make the new information something unexpected that further complicates the situation. New information shouldn’t necessarily make completing the task originally set in the task more difficult, but it should add one more interesting element. It’s basically just a way to get the story really into people’s emotions as the player characters learn things that no one else in the game world knows.

It’s worth noting that great stories also have recurring support characters, antagonists, locations, and themes. As the plot rises in action and more information is uncovered, be sure to add in some people, places, and things for stability. To make the actual storyline really stand out, have parts of the game world that stay sort of predictable: that are grounding. Not everything in the story needs to be mind-blowing; save those moments for the pieces that really matter.

Remember all that great information that got uncovered in between all the moments of rising action? Well, twist one of those vital elements to be slightly different to what the group assumed it to be initially. Basically, when presented with an idea, people fill in all the details surrounding that idea automatically. It’s human nature. Plot twists allow storytellers to create moments of brilliance by showing people that what they thought was reality… isn’t quite so.

For example, if a party of dragon slayers hears about a ‘white dragon’, they might assume that the dragon breathes ice (instead of flames), and will plan accordingly. However, what happens if the white dragon was actually a ‘wight dragon’ (undead dragon)? Well, their preparations are no longer quite up to par. But players love the twist. The key is to make twists something very near the original concept, and to not overuse them, saving them for pivotal moments. 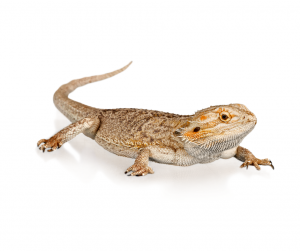 Each arc of a story follows through the preceding steps until it reaches a climax. This is a point in the story where all essential pieces come together in the point of highest drama: fighting a dragon, a coup against the king, creating a new magical item, the ending to a war, etc. The point at which everything comes to a close can be the end of an adventure or campaign, or it can be the hook to its next phase. If desired, have just one or two small oppositional forces somehow make it out alive from the climax. Once players learn that everything wasn’t quite resolved, the enemy king has escaped, and in desperation has now taken to turning white dragons into wight dragons, you’ll have the beginning of an entirely new hook to repeat the process.

The more times the story continues with small unresolved elements (think of them like foreshadowing the next story arc), the more grandiose the overall story becomes.

Inspired to start storytelling in tabletop RPGs? If you need a break from D&D, Eternity TTRPG is a tabletop RPG that puts world and story creation in the hands of the entire gaming group. You can find the game here, or read more about it on their own blog! And for more TTRPG suggestions, LockHouse has you covered, from GM tips to character creation to including puzzles in your games. Or you could take a break and come play an escape game instead. Just a suggestion.

LockHouse Escape Games is reopening! In accordance with government guidelines, we’ll be open from May 18th. Find out more and book your game on our website. Plus keep an eye on our Facebook for everything from updates to brainteasers!