It’s Christmas shopping season once more! Don’t know what to get people? Knock yourself out browsing our board game recs. And if you hate the very concept of Christmas shopping, LockHouse is here to rescue you: just buy all the things on this list, and then spend the time you saved doing something more worthwhile and enjoyable. (Like playing an escape room, for instance. Just a thought.) Here are five stocking filler board games to help while away the long winter nights!

We’re aware that Dobble was at the top of our stocking fillers list last year too, but you’re getting recommended it again this year whether you like it or not, because it’s still good. The cards are round and covered in snazzy little illustrations, and they come in a compact tin so you can take them anywhere you go. You can play Dobble if you’re a million years old. You can play Dobble if you, like the baby Jesus, are freshly born on Christmas morning (well, maybe not, but almost). Dobble is a game for everyone. The best thing about it (even better than the round tin, which, seriously, you haven’t lived until you’ve cupped the Dobble tin in your hands like an awed naturalist reverently cradling a newly-discovered cylindrical frog species) is that it’s legitimately very tricky. On the surface, the gameplay is ridiculously simple. Look at two cards and spot the matching symbol. Done. Easy. Then you actually start playing, and the world is transformed into a frantic haze in which you’re somehow unable to remember the names of basic shapes.

Love Letter is a compact game that’s easy to pick up and hard to put down. Attempt to be the last one standing and win the heart of the Princess. The sixteen-card deck contains a range of palace employees, each with their own ability. The mechanics are simple: keep one card in your hand. On your turn, draw another card, and choose which one to play and which one to keep. The quick pace and simplicity of the game make it an easy, lively way to fill some time, without any slow moments or long pauses to wait for your turn. Success depends partly on luck (which cards you draw), and partly on your skill at deducing which cards your opponents have in their hands. It’s a constantly changing game full of twists and turns, and despite (or thanks to) the simplicity, it has a ton of replay value. And if knights and princesses aren’t your particular cup of tea, there are a ton of themed variants out there, from Marvel to Lovecraft. 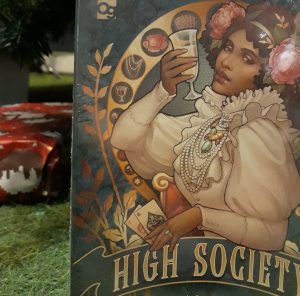 In High Society, enter a world of flamboyant competition as you and the other players strive to accumulate the most stylish assets—without running out of money in the process. High Society is a simple, fast-paced auction game, with an added twist in the form of negative cards that can hurt you if you win them. And it’s not enough merely to outbid everyone else, since at the end of the game the player with the least money is automatically cast out and shunned. The game is full of cards beautifully illustrated in an Art Nouveau style that suits the turn of the century setting. 2020’s been a weird year, and opportunities for fin-de-siecle-style hedonism and glamour have been regrettably difficult to come by while in quarantine. Luckily, High Society is around to give you a taste of the glory and despair of bygone eras. Just what you want from your stocking filler board games.

Mascarade is a chaotic whirlwind of memory and bluffing, in which your role is hidden from everybody (including, sometimes, yourself). The cards illustrate a range of sumptuously-illustrated characters, from peasants to royalty, each with their own money-collecting ability—gather enough coins and you win the game. Each player is dealt a character card at the beginning of the game, but you won’t remain that character for long, as players can shuffle and switch cards (without looking at them, so you won’t know whether you’ve successfully swapped or not unless you spend a turn to check what’s on your own card). With all the fast-paced shuffling around of cards, it’s easy to lose track of which card you’re actually holding. Luckily, you don’t actually have to be holding a particular card in order to use its ability—you just have to say you do, and hope that none of the other players can disprove your claim. A light-hearted game with lots of interaction, Mascarade is the perfect revel for larger groups. 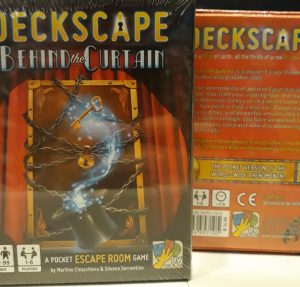 Deck(scape) the halls with escape room board games! (Fa la la la la… Okay, no more singing, I promise.) Deckscapehttps://www.dvgiochi.com/catalogo/?linea=10 is an escape room board game, bringing you a sequence of themed escape-room-style puzzles in a compact, stocking-sized box. Unlike other escape room board games, Deckscape doesn’t require an app or any other components, just giving you everything you need in the form of a deck of cards, making it super compact and portable—simply turn over the cards and start solving puzzles! There are multiple Deckscape games, in all sorts of themes, so you’re sure to find the perfect escape room experience to play at home.

Find all of these board games and more for sale in LockHouse’s board games foyer! Need more board games to make it through the holiday season? If you’re looking for something more substantial than stocking filler board games, our recommended family board games and long board games are guaranteed to give you hours of entertainment. And if you’re still stuck for present ideas, you can give the gift of an escape room at LockHouse with a LockHouse gift card!

LockHouse Escape Games is currently open! Find out more and book your game on our website. Plus keep an eye on our Facebook for everything from updates to brainteasers!