We tried LockHouse Escape Games in Cambridge and this is what we thought.

Could you escape from the perils of erm… Regent Street?
(Reprinted by kind permission of Cambridge News. Read the original article here.)

Ever wondered what it would be like to save the human race from an impending asteroid? Or to escape the grasp of a mummy? (Stop pretending you haven’t).

Well, these don’t have to be futile dreams any longer, because LockHouse Escape Games are here to serve your every wacky and wonderful need.

What are escape rooms? 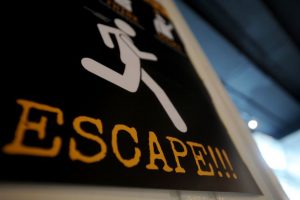 Before we launch into telling you about how magical and wonderful Lockhouse Escape Games is we thought we’d better give you the low-down on what an escape room really is.

Because, it’s a lot more than having to get out of a locked room.

You know how in George Orwell’s 1984 a higher power constantly watches over people? Well it’s exactly like that, and they see everything.

Every sarky comment you throw at your friend about her wrist action, they hear it.

And every time you fail they know it (and laugh).

It’s a real-life adventure experience for small groups working as a team to solve a series of puzzles before time runs out – and it runs out much quicker than you anticipate.

A test not of just intelligence and common sense, but of agility and your ability to work under pressure, and to deal with seemingy sub-tropical temperatures (you run around a lot, don’t wear a woolly jumper). 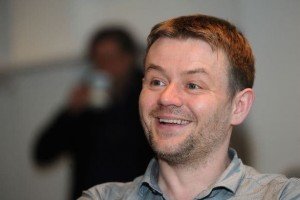 So who are they?

Quite simply a mad scientist, with a degree in physics and a passion for fun and gaming, Paul was the driving force for LockHouse Escape Games coming to Cambridge.

Inspired by similar games in Amsterdam, Paul wanted to bring some of that quirky brain tease to the place he now calls home.

Fun loving, former literature student who brings the games to life, not only with his truly astonishing character work but in his passion for the games, even though he’s done it a million times before you can tell he never tires of, well, playing God.

A mystical and creative theatre designer who has turned his hand to magic and mind craft. The second you walk through the wardrobe-like doors of the Escape Rooms you’ll begin to understand a lot more about the marvellous mind of Matthew Taylor.

Whether you’re a Scrabble fanatic or a Super Mario machine, LockHouse Escape Games has something for everyone. Genuinely.

But be warned, even a Cambridge degree couldn’t help you out here, it’s entirely dependent on team work, patience and tremendous amounts of common sense.

There are three to choose from, each with their own level of difficulty. 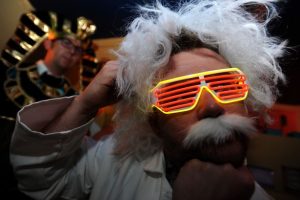 Did you hear oxygen went on a date with potassium? It went OK. (Image: Warren Gunn)

There’s a constant reminder that you’re against the clock you’ve got an hour to save Planet Earth.

A meteor is about to destroy Earth and you’re the only ones who can save the human race. You must break into the secret laboratory within the physics department of Cambridge University and figure out how to fire the meteor defence missile. 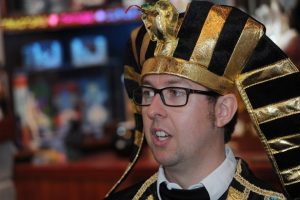 What did the baby pyramid say to the other pyramid? How’s your mummy? (Michael Brown pictured)

You’re locked inside a pyramid, and there is a stirring from within the Mummy’s Tomb. The spirits are awakening and they aren’t happy about imposers.

You’d better get out before the egg timer runs out…

The most popular game in Budapest in its original form, Lockhouse Escape Games has modified the game, adding ramps and antechambers to the original tunnel system within it. Expect secret doors, puzzles and a life-size sarcophagus!

We completed it in… oh who are we kidding, it was hard okay!

Secret Agent- Difficult (We can only imagine)

Escape from a cold war era safehouse hidden under the streets of Cambridge.

You need to get out alive, complete with evidence of double-agent Kim Philby’s betrayal.

Secret Agent is the newest of the games, which is currently being installed, so watch this space for more information.

Top Tip: Escaping takes a lot of brain power, we wouldn’t advise doing two in a row, because it is truly exhausting.

They are brilliant fun, so it’s well worth spreading it out over the course of a day, a night, a week or over multiple trips because the mummy got to us, and we haven’t been the same since… *Chattering teeth*

Indiana Jones eat your heart out.

For all the dress-up-phobes reading this who just crawled up in dread, don’t worry, it’s really not that embarrassing.

For the most part of these games you are so completely invested in the character you become that it would feel wrong to wear anything other than an explorer’s hat and knee pads.

And sometimes, the clothing is more important than you realise…

The truly wonderful thing about the LockHouse Escape Games is that, there is so much to get involved in, from old school wooden table top games, sat on funky garden garden furniture, once you walk in you never want to leave. 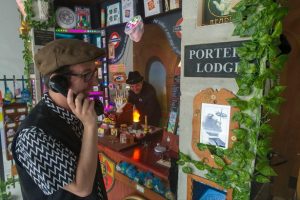 Are we talking to an absolute gem? Yes, yes you are (Image: David Johnson)

As well as this, the rooms dabble with the mystical arts, with a high tech, scarily accurate palm reading machine, which connects up into the ether to reveal truths about yourself.

There are tarot cards and a whole host of other whimsical and magical objects for you to try and buy. Matthew Taylor has created a space which can only be likened to Weasley’s Wizard Wheezes but without the puking pastels.

Who would we recommend the games to?

Our group comprised of friends, colleagues and a couple, all of whom came out alive and united.

A test of your relationships, you begin to realise who wears the trousers *coughs, we do*

For teams of up to five, at a time, this is the perfect bonding experience, for a work party or just a night out, it’s a really good way to test yourselves and your loved ones.

The boys said: “Watching families is actually the most interesting thing, you learn a lot about family dynamics and what makes people tick.”

So it would be the perfect activity to get stuck into this Father’s Day. 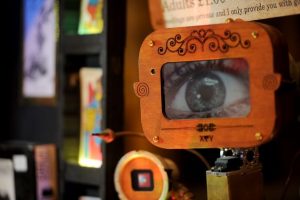 We really enjoyed our time at the LockHouse escape games and would highly recommend them to anyone who is just looking for a bit of good fun, there is a lot to look forward to what with the opening of Secret Agent and the no doubt sensational themes which will surround Halloween.

Read this article at Cambridge News